I'm back in Japan! It's hot and everything is shades of green and I am rapidly having to grasp around in my brain for Japanese words that have been buried for a while. I've only landed on Thursday but there's been a lot going on!

For the next 10 weeks, I'm living in the small town of Nakajo to take part in an Artist in Residence program, NAGAIR. On the map, Nakajo used to be a "village" 村 (as opposed to a not a "town" 市) but since 2010 it's been absorbed into the outer reaches of Nagano city. If you go on population, apparently Nakajo area has just one more person than Gunning Shire, in NSW. Maybe that's me. It's a small town but big enough to have a post office, a high school, a primary school and City hall Office. Plus more which I've yet to explore properly :) 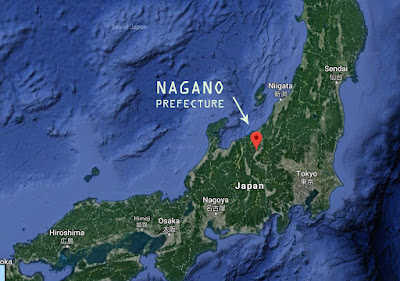 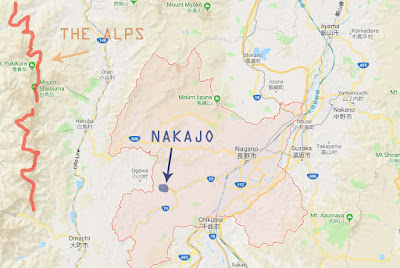 Nakajo is 30minutes west of Nagano-city (which, by the way is almost the same population as Canberra! So many facts today!) by bus. If you kept going west beyond Nakajo you'd hit the Japanese Alps, which include the Hakuba ski fields. I'm assured you can see straight to the alps from my front room but it's been cloudy since I arrived so I'm still waiting for them to reveal themselves.


Because Nagano prefecture is pretty much smack in the middle of the main island of Japan, there's mountains in every direction and the nature around here is spectacular! I mean, even the scenery on the way to the supermarket is just amazing.


I think 4 years of living in Iwakura, on the northern edge of Kyoto's suburbs served me well. I'm not phased by the spiders (SO MANY SPIDERS) and creaky things and I know that the convenience store is far away and buses cost a lot to get where you want to go. That's ok. I was a little spooked though by a lady today who was putting shiny ribbons across her rice paddies to keep the birds away who told us that bears, wild boars and deer regularly show themselves round here. Oh, and snakes. Ahhh, the wild!


I've started gathering supplies and thoughts about what I'm going to try and make here. I know it's early days but there's not a lot of time for faffing so I'm trying to crystallize a direction to take things in. I'm thinking pigments from local stones and soil to do katazome artworks of Nakajo's plants on linen and local washi. Maybe some silk if I can find some I like.


I figured out the bike I am using has squeaky brakes when I stopped every 5 metres to take photos of plants I've never seen before. With almost every plant, I have to be like "What are you?!" With the help of some trusty second hand plant books, I've been able to identify a bunch of them already and unlike Australia, it seems that the plants running riot here and just smothering EVERYTHING are not weeds at all but local plants. That's a surprise for me.

The line between Plant and Weed is so evidently fine here though. Dark purple morning glories are Japanese. Foreign morning glory species are weeds, as designated by Nagano city government. Tiny white daisies are weeds, the purple version are natives that flower in autumn. The kuzu vines with purple flowers which are tracing themselves over every substrate possible are local but the purple-berried Pokeweed is not. To me, they all look like they belong here but alas, what would I know :)

I'm sure I'll write more about my plant discoveries soon. Until then here's some more photos. I'm off to do some sketches.