Its been a long time between posts.
I am now very lucky to be in Kyoto, as a Research Student on a Japanese government scholarship. (!!)
I'll be here for two years, studying Katazome and Art history. As a means to getting this scholarship, I had to submit a convincing research proposal. My initial propsal was to research the depiction of Australian Birds in Japanese Art.

In previous posts you can see some examples of these artworks, showing cockatoos and parrots in ink scrolls and paintings from the early 1800's.

NEWSFLASH! I may have to slightly rethink my research. Let me explain why.

Yes its true there are some really exciting and interesting artworks in Japanese art and textiles which depict Cockatoos, parrots and exotic foreign birds. My initial suspicion was that these birds were brought to Japan by Dutch traders. So far, this seems true.

The Dutch were (apart from a small community of Chinese) the only foreigners permitted to trade with Japan during its self-imposed "closed country" period in the 1700 and 1800's. From what I have read so far, the Dutch brought new and strange objects to Japan to trade but also brought exotic birds and animals at the request of the Shogun and as gifts. Including.....cockatoos I suspect.

During this period that the Dutch were trading with Japan, they operated a Colony out of Java (or "Batavia"). From there they operated some of their business as the Dutch East India Trading Company. And guess what they have in Indonesia? Parrots! Not only parrots, Cockatoos!! Here we are seeing the white cockatoo as a symbol of the wide brown land but in fact there are a whole lot of different varieties of Cockatoos and many of them are found across the Indonesian islands, New Guinea and neighbouring islands.

Having "discovered" this, I have looked back at the Japanese artworks that first spurred my initial research ideas. Sure enough, they are varieties of Cockatoos found in Indonesia. Check it out:

﻿
﻿﻿
Despite these slightly disappointing revelations, there are still artworks that have to be Australian birds. Well at least, I'm not yet convinced otherwise. For example, the print below looks like a Crimson Rosella to me (an ugly one!!!), and they definitely don't occur in Indonesia. 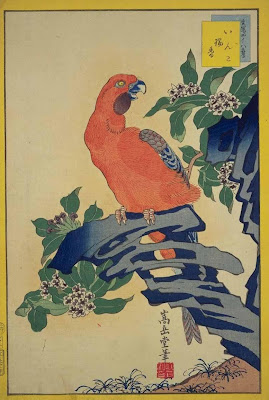 ﻿﻿
﻿﻿So what does all this mean? Well, my observation of exotic birds in Japanese art still stands true but the bird's homelands still needs some more research. Certainly, it makes sense that the Dutch would have taken birds from their colony of "Batavia" and surrounds to Japan. I wonder if whether later in the 1800's any Australian birds were exported directly from Australia? Apparently budgerigars (native to central Australia) were first taken to England in 1840 by John Gould so its possible this kind of export took place to Asia as well. There's alot more to look into, and this is just the first step.
Posted by melinda heal at 9:23 AM No comments: