There are some things that are inherent in a kachou-ga that make it more than a mere image of a flower of bird or animal. These things are hard to define but according to Uemura Atsushi, a famous Japanese painter from a lineage of famous painters, the following is a clincher:

"Depicting natural phenomena as is doesn't make something a painting. To produce a work of art, the artist must give shape to the world he imagines in his own mind and heart" (forgive the translation)

Another Japanese painter, Kawaguchi Naoyoshi, says that if an artist is to paint kachou-ga , they should not be painting the true to life external appearance of a subject but incorporating their own feelings and spirit into the work.

Also, Uemura adds that a frequent ingredient in kachou-ga is 「余白」yohaku, meaning "blank space". He says that it is by incorporating blank space in a work, the artist is hinting at this otherworldliness.

There's still a lot to read about kachou-ga but these are some of the most fundamental ideas.

I'm currently planning new work that follows some of the kachou-ga  styles and ideas, this time depicting Major Mitchell's Cockatoos. I'm still in the sketching and designing stage. 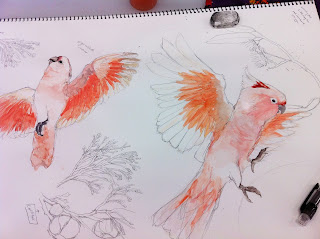 Also here's a few images from this week at school. I put up all the pieces I had finished during the spring break to show my professors. They were very positive and encouraging which was nice. 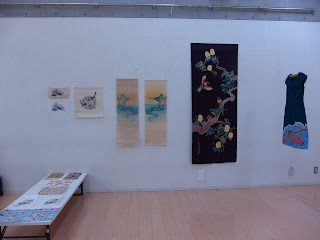 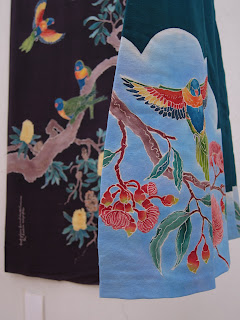